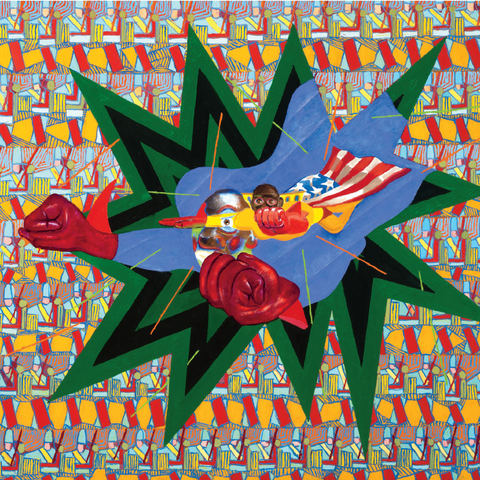 The N-Word: Paintings by Peter Williams
by ryan standfest

(Published in "The N-Word: Paintings by Peter Williams", edited by Ryan Standfest | published by Rotland Press, 2016)

From March 13 to April 5, 2015, the Novella Gallery in New York hosted an exhibition of paintings by Delaware-based artist Peter Williams titled "The N-Word". The show consisted of nine works. These works constitute the basis for this book, which expands upon the exhibition.

In 2014 Williams began a series of paintings in response to the succession of reported killings and murders of unarmed African Americans at the hands of American law enforcement, that carried over into 2015. The list included the high-profile cases of Freddie Gray in Baltimore, Walter Scott in South Carolina, Tamir Rice in Cleveland, Akai Gurley in Brooklyn, Michael Brown in Ferguson, Eric Garner in New York and Samuel DuBose in Cincinnati. Williams began with three paintings that make reference to the shooting of 18-year old Michael Brown by white police officer Darren Wilson on August 9, 2014, in Ferguson, Missouri, a northern suburb of St. Louis. The three pieces also cite the paintings of Philip Guston, who was an artist-in-residence at Washington University in St. Louis from 1945-1947, and who returned to figuration in the late 1960s after an illustrious period of abstract painting, with work that contained cartoon depictions of the Ku Klux Klan. Guston had famously said of his transition from abstraction to cartoon figuration, as a gesture of revolt: “What kind of man am I, sitting at home, getting into a frustrated fury about everything and then going into my studio to adjust a red to a blue?” Williams’ Ferguson pieces are noted for their intense red and blue palette.

Following these three works, Williams developed a second series depicting an African-American superman named The N-Word. Some of the paintings in this group make specific reference to Eric Garner, who on July 14, 2015 died from reckless actions committed by police officers in Staten island. Garner was recorded on an eyewitness video saying eleven times “I can’t breathe,” prior to his losing consciousness. In Williams’ series, caricature is reserved for the perpetrators as white police officers are transformed into pigs and fang-bearing vampires wielding phallic clubs and batons. Enter The N-Word, ostensibly a riff on the superhero figure, popularized in comic books, television and film. As a hero, the N-Word is also a symbol—a living image that captures images. Garbed in the yellow and red of the familiar Kodak “K” logo that was discontinued in 2006, The N-Word is saying “I saw this and I see you.” He captures images as an act of active, rather than passive witnessing. Williams has often spoken of his admiration for the Spanish Romantic painter and printmaker Francisco Goya, who famously titled two of the plates from his Disasters of War series, "I Saw This" and "And This Too".

In Williams’ paintings, the N-word itself is never written nor spoken, it is felt, manifested as redistributed action. By not speaking the word, and re-purposing it against those who speak it, the bondage of its original and perverse meaning is transcended. Protest speech solidifies into direct action, as the disenfranchised, repeatedly told to wait their turn to speak, bypasses speech entirely and moves into militant measures. The N-Word is a timely hero in the age of the Black Lives Matter movement, when the force of spoken pleas “Stop, don’t shoot!” and “I can’t breathe,” have been transformed into direct, targeted action. The power of these words matter, and they have fueled a movement.

In American mass market comic books of the 1970s, the superhero was primarily white, with the few exceptions being those in titles published by Marvel Comics: The Falcon, Luke Cage (a.k.a. Power Man, created in 1972 in response to the popularity of American Blaxploitation cinema in the ‘70s), The Black Panther (who was the first mainstream black superhero to appear, in 1966, created by Stan lee and Jack Kirby), and Robbie Robertson, a character from "The Amazing Spider-Man" who often served as the voice of social conscience, and those in titles published by D.C. Comics: Tyroc, Black Lightning, and Green Lantern John Stewart. Rather than referencing the history of comics directly, The N-Word is suggestive of the avenging black anti-heroes found in the Blaxploitation cinema of that earlier era. These films were critically evaluated both positively as a vehicle for black empowerment and negatively as perpetuating stereotypes. More to the point, they reimagined Hollywood genre films as filtered through the African American urban experience, presenting outsider figures confronting abusive white authority and overturning social conventions. In Melvin Van Peebles’ 1971 "Sweet Sweetback’s Baadasssss Song" and even in William Crain’s 1972 artifact "Blacula", the central characters must confront helmeted and club-wielding white police on their quest for freedom (in "Blacula", vampirism becomes a metaphor for enslavement as a white Count Dracula punishes the 18th century African prince Mamuwalde by turning him into a vampire after he unsuccessfully attempts to enlist Dracula in a mission to suppress the slave trade). These are characters constructed from the shards of tainted, unresolved historical memory, for which revolt is essential to the reconstitution of self. The fact that they populate a form of entertainment, in films identified with genre convention and often employing humor, speaks to the ways in which a pulp sensibility has the capacity to hold violent action married to radical sentiments.

On the surface, Peter Williams’ superhero The N-Word mirrors the violent, righteous, white vigilante propagated in American comic books, but in fact he is a more complex revisionist figure of retribution rooted in reflection, residing in a space that overturns convention within a vernacular visual language. The N-Word is a radical. Unlike the ironic costuming of African-American artist William Pope L., in Superman cape, tights, belt and gloves for his epic performance crawl along Broadway for the project "The Great White Way, 22 Miles, 9 Years, 1 Street" (2001-2009), The N-Word is assuming and embracing the fantasy of super strength for a superman, rather than using the image of the hero to magnify the impossibility of escape—a dream made no less distant despite the effort put forth. As a painter, Williams is concerned with the construction of the image, but he has created an alter-ego within this body of work, who acts as a deconstructionist. The caped and gloved figure of the N-Word takes flight and uses his strength to dismantle the false, prejudicial image. He harnesses the power of a negative word, summoned so often as a tool to degrade, and reverses it’s meaning and use by redirecting it toward those who wield it. This is the stuff of compelling satirical invention.

All of this is delivered swiftly with a deft visual punch. There is an admirable, righteous violence to these works. An immediacy that tells you what the artist is feeling, forcing you to feel it as well. Although the action depicted relates to the visual antecedent of comic book violence—the weight of Williams’ images is more lasting. The paintings are rendered quick and thin, almost fleeting if it were not for the color, which lingers. These are not labored-over, glossy and virtuosic paintings. They are simply what they need to be, to say what needs to be said. They are raw. This is a cartooning vernacular crossed with painting. William’s images mingle the compressed, quickly-read graphic language of the comic strip with that of abstraction. And the relationship makes sense. Consider Picasso as a cartoonist and it certainly all makes sense. Witness The N-Word throttling the throat of a pig using his red-gloved hand whose knuckles are adorned with the letters W-O-R-D. The head of the punished turns multiple shades of blue until he sees stars. A swift punch to the teeth, with a gloved hand labeled P-O-W-E-R rearranges the face into a Cubist mélange of caricatural bits. Visual satire by way of cartooning is, after all, linked to the breakdown of the image; physical characteristics modified, codified, slashed, cut-up, chopped-up, distorted, as a way to inflict visual assassination. The power of The N-Word, activates abstraction, the fragmentation, deconstruction and rearrangement of being. Perhaps The N-Word knows all too well the reductionist politics of caricature, symbolized by his very name, as applied to African Americans, and uses the power of that word, joined with Williams’ power to paint, to redirect the caricatural impulse.

The very nature of caricature calls into question different points of view—who is looking at who and the judgments in that act of looking as presented in physiognomic rearrangement. The matter of how an event is being seen and by whom, and how the personal history of that witness may affect what they see, is central to the text by Detroit author Lynn Crawford. A short work of fiction, it is inspired by Crawford’s reviewing of Peter Williams’ The N-Word series, and is in conversation with the paintings rather than providing a direct commentary. The central character of Crawford’s text is a woman who is witness to the actions of The N-Word and narrates her experiences to the reader. There is a balance struck between the truth of what she knows and the translation of what she sees. The narrative charts the act of witnessing and wonders whether somewhere in that zone of translation there is the potential for what is seen to be understood for what it is.