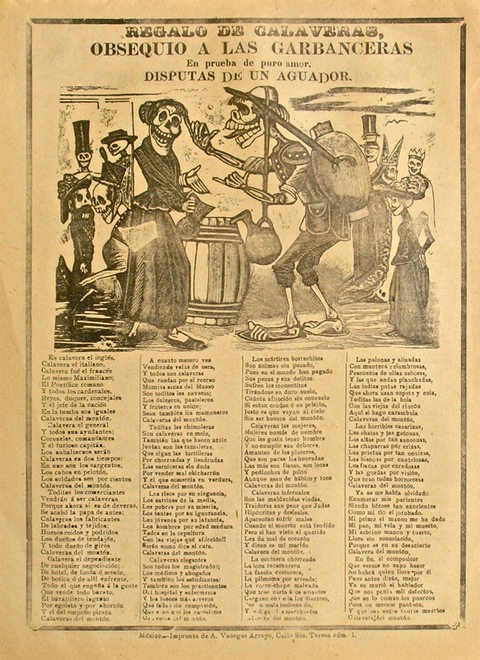 Macabre Populism From The Chosen Land
by ryan standfest

In 1920, the remains of the Mexican printmaker José Guadalupe Posada, who had died seven years prior, were exhumed to make room for the burial of the wealthy deceased. This followed Mexican law. The Posada family did not claim the remains, and so the bones of Posada were mixed with those belonging to others within a single common grave in the sixth-class section of the Panteón Civil de Dolores. The printing shop used by Posada in Mexico City, had to be relocated following his death, due to the excavation of an Aztec temple near the shop basement. And yet, the memory of Posada has persisted, albeit as a ghostly afterimage not unlike that from an overused printing plate in which the source image has been degraded with time. The Posada we know today is a shadow projection from the past, altered by the light of subsequent generations.

It was in the 1920’s that a resurrection of Posada would occur. The populist tenor of his work, with roots in street-based art that spoke directly to the daily living experiences within Mexico City, would inspire the muralists Diego Rivera and José Clemente Orozco, who were seeking a modern artistic expression rooted in a rejection of bourgeois art. The notion of “popular taste” was linked to the spirit of revolution and to Modernism, as a means to erode static and elitist tendencies and activate a visual language to cultivate social awareness. Posada was embraced as a maker of prints that chronicled the texture of contemporary urban life in all of its poetic and violent contradictions, providing a voice for the common city dweller.

The print medium was employed for its functionality—the ability to enlarge the scope of connectivity by means of efficient reproduction. Indeed, Posada’s printshop was an image factory, industriously generating over 20,000 engravings. The modern marriage of populist objectives and mechanical reproduction, helped cement Posada’s reputation as a proto-Mexican Modernist. But these alone were not the sole defining qualities for intellectuals intent on labeling Posada as a father to the modern. For he was also a practitioner of abstraction in the use of the Calaveras figure—the living skeleton employed as a stand-in for all classes and all races; Death as the equalizer and eraser of identity. It is with Posada’s Calaveras, that Surrealist founder André Breton, who arrived in Mexico City in February of 1938, would appropriate the printmaker for his own modern revolutionary goals. In his assessment of Posada, Breton would claim him as a unique, early creator of black humor in visual form—a particular sensibility born of survivalist instinct as manifest in mordant cynicism. To Breton, Posada’s macabre tendencies were not passive flights of fantasy, but an urgent response to the conditions of contemporary life and a call to action on behalf of the marginalized through the use of lively and humorous images of death.

In 2013, through my small publishing house Rotland Press, I edited a book of dark and absurdist humor titled BLACK EYE 2. Within it was a section titled “Memory of Posada,” that presented images by 18 contemporary cartoonists, illustrators and printmakers (1) who responded poetically to a prismatic idea of Posada. As with any memory, this collective portrait reimagines Posada through sets of idiosyncratic lenses that both reveal and distort the subject much the way Posada did with his Mexico. That project was a knowing nod to André Breton’s “Memory of Mexico,” an idiosyncratic, impressionistic and ultimately Euro-centric remembrance of his travels throughout Mexico in 1938 as published in the Surrealist magazine Minotaure. (2)

In the fall of 2014, I initiated “CHASING POSADA!”— as a follow-up to “Memory of Posada,” comprised of an academic panel, an exhibition and a publication. Its focus was the relationship of Posada to the environment that directly influenced his work—the city. As an artist making my home in a troubled and storied city such as Detroit, which has been viewed through distorted lenses that both obscure and reveal its multi-layered character, I found resonance in Posada’s depiction of his city.

The “CHASING POSADA!” exhibition opened at the Signal-Return printshop in the historic Eastern Market district of Detroit. (3) The location chosen was suitable, in that the work was shown in an industrial setting, above the printshop itself in a former chair-building workshop and warehouse. With exposed brick, raw wood plank flooring, and the display of printed works on thick, hinged cardboard walls, the exhibition turned away from the white cube aesthetic. An international group of artists including Marie-Pierre Brunel and Marc Brunier-Mestas from France, Arnaud Rochard and Wouter Vanhaelemeesch of Belgium, Ben Jones from Great Britain, and Sue Coe, Bill Fick, Kaz and David Sandlin from the United States, produced work that summoned with great immediacy, the sensational and macabre language of Posada—a graphic vernacular that is at once specific in intent and fully understood upon viewing.

The accompanying 16-page tabloid-sized newsprint publication did not serve as an exhibition catalog, but presented original illustrations as a means to illuminate alternate print strategies. (4) As a print pluralist, I see no distinction between the limited edition and an industrial print run, between the digital and the hand-pulled, images on newsprint and those on the finest French stock. The CHASING POSADA! publication is meant to be seen and felt as a digitally-printed object, ephemeral in nature with a built-in portability and economical accessibility, to stand alongside single sheet images reproduced using traditional printing methods. Although each may end up in a drawer or on a wall, on a bookshelf or behind glass, in a used bookstore, on eBay or in the rubbish bin, this printed material results from the transference of ink to page—part of an ever-evolving practice that J.G. Posada engaged with: the mass purveyance of visual communication. The designer of the publication, Eva Zielinski, worked with me on a presentation strategy concerning the formal language of “mass printedness” itself. After considering the work of Italian décollagist Mimmo Rotella (5), who was known for his torn film poster work that mimicked the palimpsest of street broadsides accumulating and aging over time, the pages of the CHASING POSADA! tabloid reveal the degradation of a digital printing device running out of ink, having a sheet of paper run through in several passes, with the layering of ghost images. Additionally, the cover of the publication, depicts a copper relief plate, and the resulting printed broadside pasted to telephone poles and walls in a dilapidated environment recognizable as Detroit. In dialogue with Posada, it was essential to take note of the process by which a printed image may be transformed into a traveling object occupying a physical and social landscape.

In the “CHASING POSADA!” academic panel, presented during the 2014 Mid-America Print Council Conference at Wayne State University in Detroit, the artist Tom Carey addressed how his own printed work relates to a social terrain, much in the way Posada’s work did:

My print series “Cuerno de Chivo” (Spanish for “Goat’s Horn”; Mexican drug dealer slang for an AK-47 assault rifle) form a narrative that highlight connections between Posada's images of skeletons and tabloid violence, with the deities of Meso-American culture, the history of European Colonialism in the Americas, and contemporary Mexican popular culture. These Mexican sources were filtered through my admittedly gringo point of view—a point of view informed by growing up in Detroit during the reign of King Crack, heavy metal music, and horror movies.

Carey had made mention of the many graphic adornments of gang members, and the visual echoes shared with the imagery of Posada. Another of the presenters, artist Stephen William Schudlich, acknowledged the urban setting as a locus for immediate, responsive work shot from the gut:

The elements of satirical acuteness and social engagement embedded in Posada’s work, engage me as an individual who observes and illuminates what is witnessed within my own urban setting: Detroit. It is this observation of the less positive aspects of the urban experience that fuels the sarcasm and cynicism manifested in my work. Certainly, Detroit, affected by massive blight, rampant social decay as well as an abandonment of community order and structure offers no shortage of locations for artists to “post” unsolicited commentary and expression.

Emilie Owens, the Curator of International Prints, Drawings & Illustrated Books, at the National Gallery of Australia, Canberra, focused on the notion of “perverse populism” by drawing a correlation between the prints of Posada and the printed works of Jake and Dinos Chapman:

Despite its vulgar content, Posada’s work was popular: his audience did not feel guilt at their enjoyment of his sensational depictions of murder, nor were they ashamed to gawk at his freaks. In 2014, over one hundred years since Posada’s death, the world remains a violent and unstable place. Despite the constant barrage of violence we are subjected to through the twenty-four hour news cycle, today’s audiences still crave the horrific and we are given sanitized, neatly packaged versions of this in the form of reality TV makeover shows, computer games, and slasher films. The enduring popularity of such forms of entertainment is indicative of the wide appeal of horror and the abhorrent, and goes some way towards explaining the success of the Chapmans. Like Posada before them, Jake and Dinos Chapman employ printmaking in the service of the macabre, presenting a dystopian vision that appeals to us despite ourselves: a perverse kind of populism.

Posada had put forth an idea of Mexico. An idea that endures. As a popular illustrator-printmaker, he both responded to and shaped the desires of his homeland by way of a sarcastic disposition that mingled satire with political commentary. He had a taste for the sensationalistic in visual reportage of the world he witnessed, liberally seasoning his images with the right amount of captivating distortions.

Living and working in Mexico City, Posada observed it from the window of his street corner printing studio. His images, usually accompanied by a generous amount of text, reflected the conditions of the city— a milieu marked equally by sudden eruptions of violence and celebration; where murder was a daily occurrence despite all manner of political and religious entreaties; a place of vitality both self-destructive and yet regenerative. It was an atmosphere permeated with the unique spirit of Mexico— one that was playfully mordant, a place of great contrast where opposing sensations merged. André Breton characterized the country as possessing “splendid funeral toys” and being “the chosen land of humour noir." (6) In this land of black humor, skulls were made of sugar and the skeletons were dressed in the finest formal wear to dance and pedal about on bicycles. In the hands of Posada, the medium of the printed image intersects with an audience and it's appetite for plebian subject matter. The prolific craftsman-illustrator worked in a style resulting from the spontaneous demands of popular tabloid journalism. In rapidly produced images that could be alternately clumsy or refined, with engraved lines set in high contrast, he delivered what his audience craved—disasters, freaks of nature, social scandals, scenes of fantastical and everyday violence— which functioned both as moral lessons and as entertainment. It was a vision of an unstable and violent world but also an act of honoring the daily struggle of living.