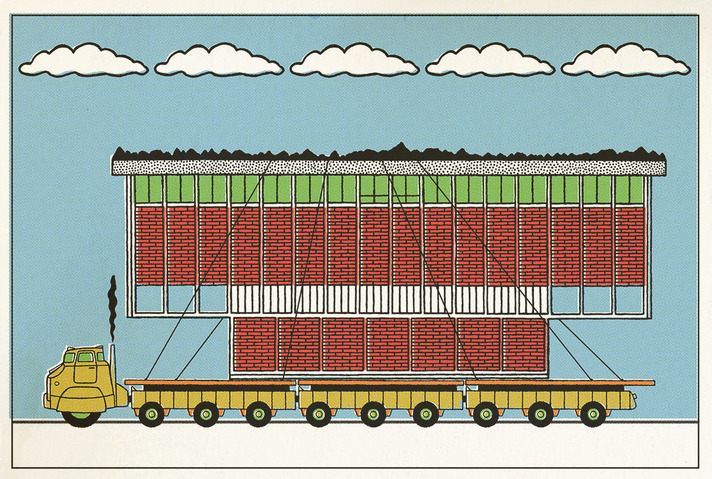 Getting Malled: Back to the Third Place
by ryan standfest

DETROIT, Mich.— THE BIG SHOP AROUND THE CORNER FOUNDATION is a guardian of the thorny legacy of Austrian-born architect Victor Gruen who died in 1980, but its latest undertaking seeks to preserve and present a critique of Gruen’s most well-known achievement, and inadvertent threat to peace and harmony—the shopping mall.

A minimalist red brick façade, punctuated by vertical white steel girders and a thin horizontal band of windows near the top, the exterior of Northland Center can only be described as a colossal ominous box. A massive, inert disruption of the natural landscape. The mall was shuttered in 1982 after the suburban population regained its senses and migrated back to the city of Detroit from 1979 to 1981, and all major freeways were backfilled after the abolition of the automobile and rail transit was reinstated. By way of a true herculean undertaking, the mall was painstakingly dismantled and shipped in pieces from its location in Southfield, to be reassembled by a workforce of thousands, on a parcel of empty land in Highland Park, once belonging to the long-defunct Ford Motor Corporation. Although not a part of Detroit’s architectural heritage, it’s very existence affected the fortunes of the city, which is why the city and the BSACF agreed it should be brought to Highland Park. Northland Center was placed near the historic Ford Plant, which had adversely affected the course of history through its expansion of mass factory manufacturing methods, giving birth to the modern era as we once knew it. The Ford Plant and Gruen’s mall together now presents a potent history lesson on the dangers of our former acceptance of Capitalism as the guiding socio-political force.

Northland Center opened to the public on March 22, 1954, at the cost of 30 million dollars. Ladies Home Journal, Life, Look and Time all declared it a monumental moment for the nation. The future had arrived, and it took the form of a sprawling 1,045,000 square foot open air structure. One level was devoted to retail, the other a service basement and a fallout shelter (should the world’s end be expedited by atomic science). At first there were sixty-five stores and services which grew to eighty-one in a matter of months. The anchor structure was a four-story J.L. Hudson department store, situated in the center of it all, and surrounded by five retail sections and seven open courtyards that were green spaces featuring fountains, magnolia and cherry trees, flowers, pre-recorded music from a complex system of loudspeakers, and thirteen sculptures by artists such as Lily Saarinen (wife of noted Modernist architect Eero Saarinen), Gwen Lux and Marshall Fredericks. Most of these works could be described as period kitsch at best, relying on the representation of animals and children as the default mode of feckless public theatre.

The dismantling of the mall was briefly halted after workers discovered a well-dressed male corpse buried beneath the beloved limestone and bronze sculpture “The Bear and the Boy,” by Marshall Fredericks. “That sculpture was such an iconic part of the mall experience for so many generations of children. It is remarkable that a corpse was beneath it the entire time,” said Crispin Unterland, the director of the foundation’s preservation of Gruen buildings. Authorities are still trying determine the identity of the deceased.

“We want to take visitors back to 1954 and put them into the shoes of the people who marveled at the mall then,” said Mr. Unterland. Victor Gruen (b. Viktor David Grünbaum), was a committed Socialist émigré who once performed satirical political cabaret. His Socialist reformer tendencies led him to formulate his idea for the mall as a “third place,” that is a commercial community space between the home or primary place, and work or the secondary place. The third place was intended as a community gathering zone, a means to broker connectivity in the suburbs. But Gruen was also a salesman, and the more he could gather people into a space and keep them there, the higher the odds they would eventually spend money on the products his clients offered.

The J.L Hudson company contracted Gruen to construct his third place, and eventually Northland Center covered 163 acres, with 10,000 parking spaces (at the time, the largest parking lot in the world). The mall resembled a mausoleum with its introverted design, in which the exterior walls were intentionally left featureless and all activity was turned inward, toward a core interior. Acclaimed for activating the bold concept of placing shopping on two levels, connected by an escalator, Northland Center was “a structure of monumental banality planted in an ocean of concrete,” said Sara Drech, a member of the restoration team, though the interior was “quite colorful and bold as no design expenses were spared.” This shopper’s paradise was complimented by indoor and outdoor signage designed by the pioneer Modernist graphic designer Alvin Lustig. “It is a sign of just how important the idea of the mall was, in 1954. It was an attempt to signal a way forward toward a vision of Postwar America as an all-access dream,” noted Mr. Unterland. Indeed, the mall benefited from the increasing popularity of the automobile and a location that allowed easy access from major freeways. Free gasoline was even offered to customers who had run out in their drive to experience Northland Center.

Today the mall has become a museum, dedicated to preserving the narrative of hope coupled with commerce, that gave rise to its construction. Within the mall museum, docents in hats, white gloves and period costumes take visitors on simulated shopping tours. A diminutive actor with a manic, vaguely Eastern European accent, sporting a bowtie and a prop cigarette, portrays Victor Gruen pitching his ideas for a shopping utopia to those being given a tour of the mall. ''What's so special about a day at the shopping mall!?'' he yells, following the original sales pitch. ''Everything! Designed for maximum comfort and delight with the highest aesthetic standards of the day!'' Visitors are encouraged to view the mall through the capitalist optimism of 1950’s America: “It's more that just about shopping; it's a new way of living!''

For the grand opening of the Northland Center Museum, period cars were rented, to fill the now-downsized parking lot, and provide an inkling of what parked cars in 1954 looked like. Actors were hired to don mid-century attire to fill the mall with bustling crowds. Even the music playing throughout the museum, delivered by speakers, was performed by a live orchestra.

Although the open-air pavilion of Northland Center was enclosed as a complete environmentally-controlled space, the BSACF Foundation has returned the structure to it’s original form. This configuration has ten dress shops, seven shoe stores, three millinery shops, three jewelry shops, four home furnishing and appliance stores, five men's and boy's shops and four restaurants, as well as a bank, post office, medical clinic, record store, drug store, beauty parlor, lost children office, three hundred seat Community Room, and even its own fire department. Most of these shops have been reconstructed, and easy-listening instrumentals are once again heard from the numerous strategically placed speakers. The sounds of Ray Conniff, Percy Faith, Andre Kostelanetz and Mantovani fill the spaces as visitors may mock-shop at fully-stocked recreations of stores as they were in 1954: men’s wear at Hughes and Hatcher, ladies’ apparel at Winkelman’s, toys at Barna-Bee, various sundries at Kresge 5 & 10, and a sandwich with an ice cream soda at Sander’s Confectionary.

Attempting to recreate the nutritionally-challenged menu of mid-1950’s America dining has been difficult for the culinary experts working with the museum, but at the retro Big Boy diner, visitors can sample such long-lost cuisine as the Brawny Lad, a 460 calorie meal consisting of a ¼ pound beef patty topped with a slab of butter and a half-inch thick slice of onion on a toasted rye bun, accompanied by a 400 calorie hand-dipped chocolate shake. The J.L Hudson anchor store has been converted into a visitor center, complete with permanent and rotating exhibitions and an IMAX documentary “The Gruen Effect” that all carefully chart the historical context of the rise and fall of Gruen’s suburban utopia. A splendid gift shop sells Gruen-inspired dinnerware, bowties, scale models of his numerous mall projects and copies of his seminal 1965 text “The Heart of Our Cities: The Urban Crisis: Diagnosis and Cure,” which proposed a solution to sprawl and the shrinking city. Unfortunately, the core revolutionary concepts of Gruen were never implemented, as the shopping mall, which he later disavowed and characterized as a bastardization of his principles, had taken on a life of its own.

One museum attendee noted: “Gruen was so close in re-thinking urban design and solving the urban “problem,” but what he produced was aligned with a failed capitalist strategy that we no longer have to deal with. Thank god we finally emerged from the problems of that era!” Indeed, the demise of the mall was not brought about solely by it’s design, but by it’s very success as a capitalist venture. It was a monster that planted the seeds of suburban sprawl with it’s partner in crime the automobile, draining the city of lifeblood. But now we know better. The shopping mall has become a legendary, long-passed experiment, like the automobile itself.

''This is a structure that demonstrates a theory of utopian renewal from another time. It failed. Terribly so. But by preserving this failure for future generations to witness, we may better understand what not to do again.'' said Ellen Brickton, the foundation’s curator of Urban Lessons. “But it really is a beautiful failure, filled with light and color and pleasing shapes that fill you with quite a bit of bliss. It ultimately seduces. That was the Gruen Effect.”