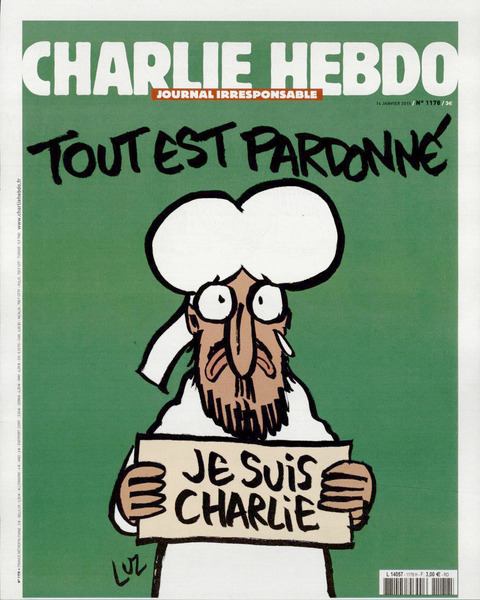 Editorial: Getting To Know Charlie
by ryan standfest

I knew little about "Charlie Hebdo," except that it was the progeny of the brazen French satirical publication "Hara-Kari" (subtitled "Journal bête et méchant" or “stupid and vicious magazine”), which itself ran from 1960 to 1986. "H-K" was of interest to me due to the contributions of illustrator and satirist Roland Topor, and later because of my exposure to the reproductions of it’s staged photographic covers throughout the years. These covers struck me as more barbed and visceral than anything that could ever have been displayed publicly on newsstands in the US. They had a terrifically schlocky, raw, color-saturated character, as if Herschell Gordon Lewis were on the staff of the "National Lampoon." My exposure to the no-holds barred comedic shock strategy of "Hara-Kiri," supported by the revolutionary zeal of its editors and contributors, lodged itself somewhere in the dormant part of my consciousness. And then on January 7, 2015, my awareness was reawakened. It took me a while to connect "Charlie Hebdo" to "Hara-Kiri," but once the linkage was made, I found myself obsessively pursuing a line of inquiry.

As soon as news of the attack on the offices of "Charlie Hebdo" appeared online, I immediately withdrew from any and all tasks at hand and began scouring news sources for forthcoming pieces of information. On Facebook, there began a flood of postings within the community of cartoonists and cartoon historians, critics and editors whose commentary appeared in my newsfeed. I watched as numerous profile pictures within the cartooning community changed over to the ubiquitous 160 x 160 pixel black square with the text “JE SUIS CHARLIE.” “JE SUIS” was in white Sweet Sans Heavy and “CHARLIE” was in light grey Block Condensed typeface. Despite it’s implied message of solidarity, this Internet meme was funereal in appearance. I briefly gave my profile identity over as well, “becoming” Charlie. But then something started to happen. To those unfamiliar with "CH," mostly here in the United States, questions were being asked and declarations posted about the content of the magazine itself. A sensitivity as to the goals and limits of satire emerged, and what was once a lament for those murdered in Paris transformed into a blanket declaration of solidarity for free speech in the name of cartooning and satire. This subsequently metamorphosed into a discussion of responsibility with regard to representations of “the other.” Debates emerged, arguments raged on, and the “JE SUIS CHARLIE” profile pictures were swapped out for something taking far less of a public stance. The lines between left and right, funny and not funny, justified and unjustified began to blur in the ensuing dialogue.

I traded out my “JE SUIS CHARLIE” picture, perhaps out of cowardice to engage, but more to the point because I felt I had no right to make such a declaration. What I really sought in the aftermath more than anything was a focused and complete conversation about who and what "Charlie Hebdo" is and what it stands for. On January 9th, I posted the following status update on my Facebook page, accompanied by a link to a "New York Times" article by Jennifer Schuessler titled “An Attack Chills Satirists and Prompts Debate”:

"There is so much to say and write regarding a discourse on the particulars of satire and the perils of caricature at this time. Cartooning is a potent medium. Historically it always has been. The image punches far quicker than the text, and the cartooned image in particular does not have the congealed delivery-speed of those images often found on gallery walls. Such potent immediacy is what gives cartooning its no-frills strength, but it can also allow for equally charged responses without an established zone of deep contemplation."

"Based upon my minimal familiarity with "Charlie Hebdo," and its earlier incarnation "Hara-Kiri," I believe the developing discourse in which the work of its cartoonists is labeled "racist" requires further scrutiny. Satirical cartooning, by its very nature, simplifies and relies on "types." This of course, can lapse into physiognomic racial profiling (see the depictions of the French by the 18th century British satirist James Gillray, for starters, and then on to the cartoons produced by Warner Brothers during WW2, depicting the Japanese). The merging of character with caricature can be ham-handed and vulgar in a way that contemporary identity politics is rightfully suspicious of. But it is equally important to understand where the work of "Charlie Hebdo" was coming from and to get a sense of their entire editorial output. Why were they doing what they did? The manner in which the Catholic church, Marine Le Pen or any other member of the non-Muslim ruling class in France was portrayed in their pages, was just as reductionist and childish as the Islamic fundamentalists whose caricatures have been getting so much play since the tragedy. There are many commentators, mostly in the United States, who have said that the editorial staff at the magazine was wrongly attacking a religion, and those who follow it. Last I checked, religion is fair game in the circles of satire since it is a cultural broker of power, a figure of social control, right up there with political structures. Where the discourse has steered to, is a connection between a specific religion and the identification of its followers as being of a certain racial type, with accusations of xenophobia on the part of the cartoonists. Most of the critical articles I have been reading, are healthy in the way they have opened up a crucial discussion about the toolbox and targets of the satirist and the use of humor as a bludgeon versus a scalpel, but they are also articles that are cherry-picking imagery and ignoring a larger context so that they may artificially fortify their argument. They begin with a generalized assumption that "offensive speech", images or otherwise, is just plain offensive and therefore not needed in a civilized world, with an attempt to illustrate what the author finds offensive. But what if there is a place for the offensive?"

"I think the entire spectrum of the visual philosophy of satire must be laid out for intelligent examination. There has been a failure to mention what a readership of a satirical publication has come to know and expect over time, following the magazine's evolution from target to target, versus an audience that is shown select images out of context and in reaction to a specific moment. What about all of the American "types" satirized in the pages of "Mad" magazine over the years, as fat and stupid and generally hopeless, submitting to the "religion" of Capitalism? Is that not a generalization? A point should be made of when and why the scales tip in the visual depiction of the "other" versus the "self." A question should be raised concerning who can comment on whom and when and how. I hope this discourse continues, and I hope that serious and well-informed inquiries are made as to what makes an image racist or sexist, satirical or vicious, or when it is both. What is the intent of provocation? Who or what is the right target for satire, and who or what is the wrong target for satire? Who is in the position of power? What is the place of the offensive? In the meantime, a piece in today's "New York Times" begins to dip its toes in some of this."

The posting received nine “likes” and a few follow-up comments. However, I soon passed into a manic state of urgently seeking answers to the questions knocking around inside of me. Unable to sleep, I felt a necessity to clear a path toward a place where the unreconciled was laying in wait. I continued to read news articles and essays on the subject, and to watch interview clips on YouTube. It seemed to me that this terrible event was a flashpoint from which essential conversations could arise. Conversations typically avoided. Having been raised in a typically white-populated suburb of Detroit, there has been awareness my entire life of deep racial division, of racist expressions and the use of mockery to denigrate “the other” out of fear, insecurity and scapegoating. The aftermath of the aftermath to the attacks in Paris, in which a dialogue among cartoonists developed privately and in news outlets concerning the use and possible abuse of visual mockery in relation to the other, began eating away at me. But this was not a conversation I could have with myself, nor one that my limited knowledge could engage with. Rather than attempting to punch above my weight, I thought it would be best to solicit responses from those whose opinion on the matter could be trusted to penetrate deeper.

Desperately seeking context, I drafted an email outlining my concerns and sent out an invitation to cartoonists and critics and historians of the medium, along with those approaching the topic from a socio-political perspective. I detailed the need to create a new publication titled "Rotland Inquiry" that would become the “critical organ of Rotland Press,” for the sole purpose of providing thoughtful perspectives on the uses of visual humor as a strategy of attack. I immediately received a number of responses, some interested and committed, some interested but unable to commit themselves to clarity. Subsequently, there were original essays and cartoons created that sit alongside previously published works revised for this forum. A discussion emerged between some of the contributors and myself as to whether I would publish any of the satirical images of the prophet Muhammad that had been generated by the cartoonists of "Charlie Hebdo," in support of the essays. After much thought, I decided that I would. My reasoning was that this was a critical forum above all, a zone to examine the images and the context within which they were created. You cannot openly discuss an image while prohibiting that same image. It also struck me as appropriate, that rather than publishing these responses in the form of a book, that “Rotland Inquiry” recall the tabloid newspaper format of the alternative and underground press publications so prevalent in 1960’s America, for which critical social inquiry was constant alongside texts and images of a defiantly satirical nature. For a while, we once had our own manifestations of "Hara-Kiri" and "Charlie Hebdo" let loose on the cultural landscape.
Loading...